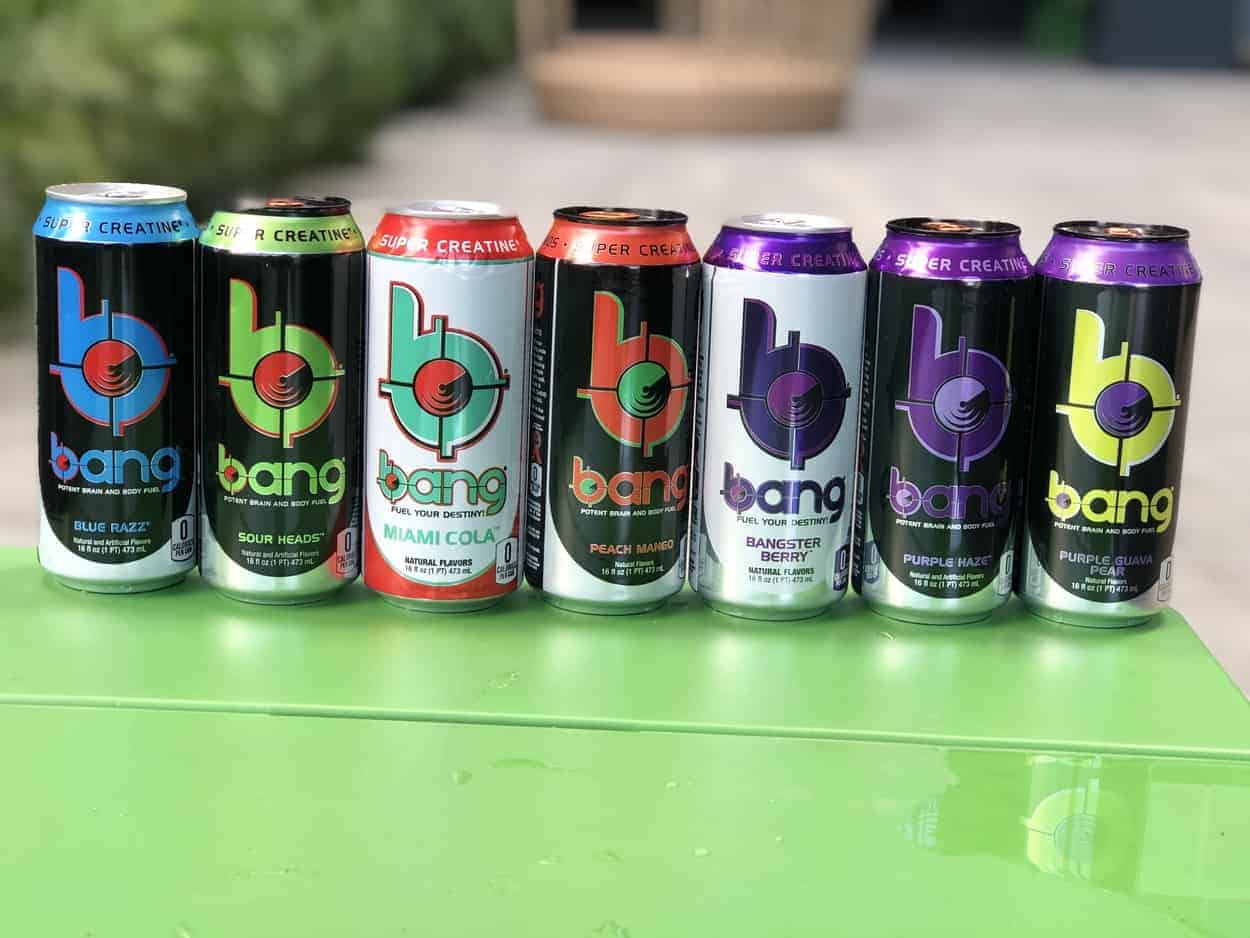 Short Answer: Bang Energy kicks in 20 to 30 minutes after consumption.

Bang is a sugar-free energy drink loaded with caffeine, vitamins, amino acids, and other energy-boosting ingredients to improve overall performance.

Indeed, Bang’s got you covered if you’re looking for an energy-boosting drink!

Having said that, when does Bang begin to work? Also, when is Bang supposed to wear off?

I have all the info that you need in this article. So, keep reading!

Let’s take a look at the nutrition facts of Bang Energy before diving deep. Check out the table below!

As you can see, Bang Energy contains 300 mg of caffeine which can be considered high compared to other energy drinks available in the market. It is best to consume Bang in moderation to avoid caffeine overdose and other side effects.

SUPER CREATINE is Bang’s most highlighted ingredient. It is a proprietary ingredient that contains L-leucine which is absorbed by the body quickly. In theory, it is more effective in terms of bulking up muscles and muscle recovery from post-workout stress.

For a better view, I have listed the ingredients of Bang Energy below:

If you want to learn more about Bang Energy, I have reviewed it in this article.

How Much Caffeine is Present in Bang Energy Drink?

Bang Energy contains 300 mg of caffeine, which makes it one of the strongest energy drinks on the market.

Caffeine is an important ingredient in energy drinks since it keeps you awake, enhances your physical performance, and improves your mental performance.

For what it’s worth, you’ll be able to handle the caffeine in Bang Energy if you’re used to the stimulant.

It would be best if you don’t go overboard with caffeine, regardless of its benefits. The FDA advises healthy adults not to exceed 400 mg per day.

Here are some of the side effects of caffeine if overconsumed:

Therefore, to stay safe, you should limit the amount of Bang Energy you consume. I also recommend spacing out your consumption to avoid any of the symptoms mentioned above.

Is There Sugar Present in Bang Energy Drink?

Bang Energy contains zero amount of sugar in its formula.

Although Bang does not contain any sugar, it uses artificial sweeteners – Ace-K and sucralose.

Ace-K and sucralose are calorie-free sweeteners that are sweeter than regular sugar. That said, it makes your can of Bang flavorful and taste sweeter!

Bear in mind, the AHA proposes the following sugar intake so you can avoid adverse effects:

You might experience these side effects if you go overboard:

Watch the video below to learn more about sucralose – one of the artificial sweeteners used in Bang Energy!

When Does Bang Energy Kick In?

Generally speaking, the caffeine kicks in fairly quickly, but it takes around 20 to 30 minutes to get the actual effects of Bang depending on your metabolism.

You would typically feel the effects of Bang or any other caffeinated beverage within a short period, depending on your health and caffeine tolerance.

However, the duration of the energy boost will depend on how quickly you consume the can. If you consume it within an hour, you won’t be hit by a whirlwind of 300 mg of caffeine all at once, which leads to a sustained energy boost without the extreme peak.

As an alternative, if you drink a can of Bang all at once, you’ll take in 300 mg of caffeine very quickly, which I wouldn’t recommend doing since you might not be able to handle such a large dose of caffeine so quickly.

Because personal caffeine tolerances must be taken into account, it won’t be easy to estimate the time when Bang begins to kick in. Nevertheless, you will notice the effects around 30 minutes after consumption, if not sooner.

The full effects of Bang would likely occur within 45 minutes, resulting in a feeling of heightened energy and focus.

It will take some time before you don’t feel the effects of Bang anymore, and it will also take a lot more time for the caffeine to leave your body completely after that.

How Long Does It Take For Bang Energy To Wear Off?

It would take around ten to twelve hours for Bang to be completely removed from your system.

While you can find an easy answer online about how long it takes for the caffeine from Bang to wear off completely, it will vary from person to person depending on metabolism.

If you want a good night’s sleep, do not consume Bang late in the afternoon or evening.

Does Bang Make You Crash?

Even though Bang won’t cause a sugar crash, you’re likely to feel a caffeine crash once the effects have worn off.

Since caffeine only masks fatigue up until the effects wear off, you won’t be experiencing a crash from the stimulant but rather from being tired before drinking a can of Bang.

Caffeine blocks the functions of adenosine receptors, which are transmitters that tell your mind when to sleep. When you consume caffeine, your body remains awake longer than it normally would.

As a result, even though you may not feel tired, adenosine is still piling up in your brain. When the caffeine wears off, the adenosine will flood your brain, causing you to feel more tired than you did when starting.

You can avoid a caffeine crash after drinking Bang by getting enough sleep and taking plenty of fluids to help the body recover.

Bang Energy kicks in 20 to 30 minutes after consumption and the effects could last up to 12 hours.

As we all know, it is one of the strongest energy drinks on the market, so it’s best to drink Bang in moderation to avoid side effects.

Overall, Bang Energy can give you a good energy boost that’ll last you throughout your workout.