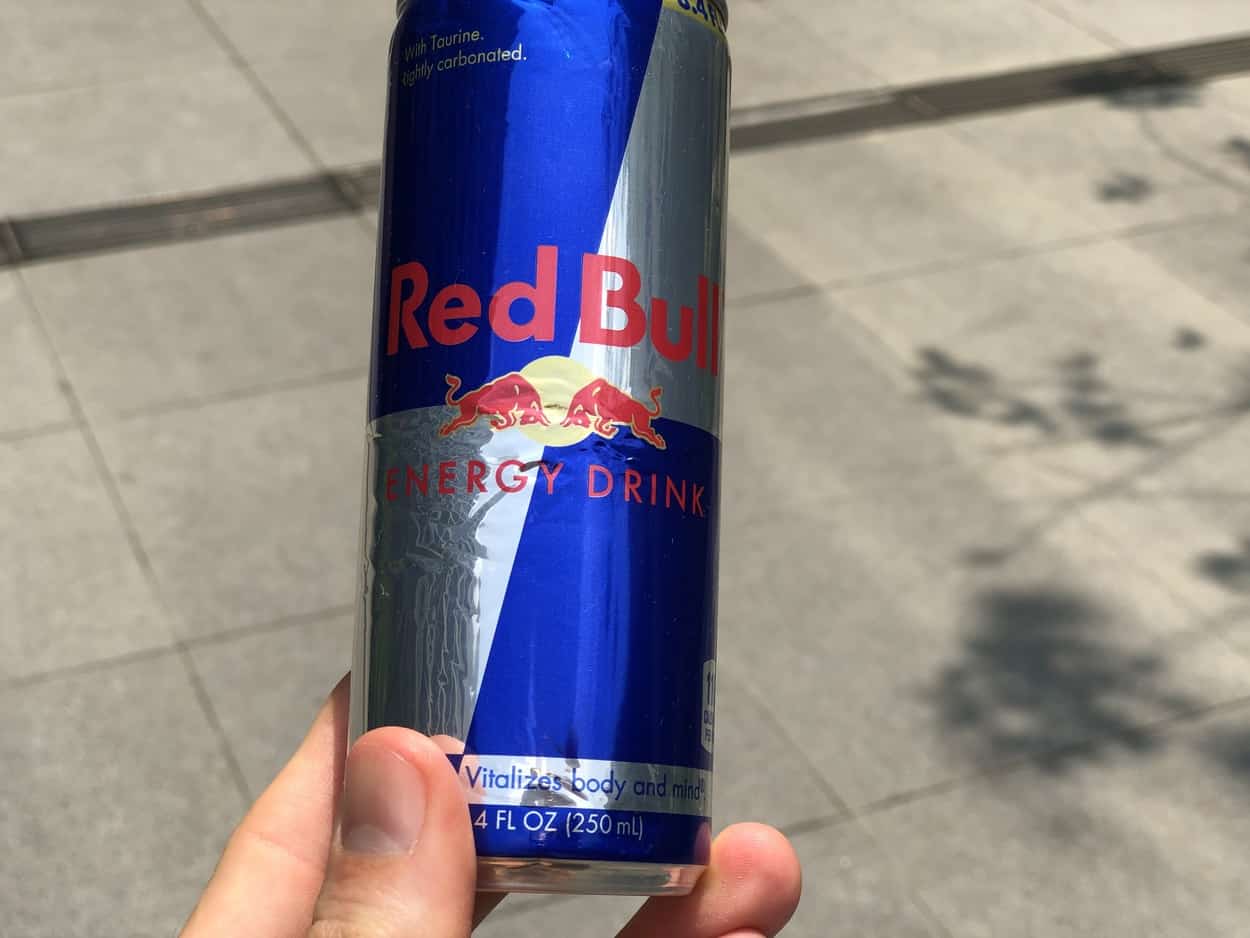 Based on its ingredients, the formula of Red Bull is quite simple. The main energy-boosting components of Red Bull are caffeine, sugar, and taurine, along with essential B-vitamins. But you might have heard that Red Bull contains a little more than that.

Despite its popularity, there’s still a misconception about Red Bull containing alcohol. But let me assure you, the drink contains no alcohol. It’s often mixed with different alcoholic drinks, which we will get into later, but Red Bull on its own is alcohol-free.

If you want to know more about Red Bull and its ingredients, keep on reading.

Let’s start with the list of ingredients in Red Bull energy drinks:

This table shows the nutritional value of the various components in Red Bull:

Just by going through the ingredients and nutrients of Red Bull, it’s easily depicted that the drink contains no alcohol or any related components in its formula.

The formula of the famous Red Bull energy drink is quite simple yet its impact on the body is effective and long-term.

Here are the main active ingredients in Red Bull:

An 8.4 fl. oz can of Red Bull energy drink contains 80mg of caffeine.

Caffeine is an essential component of energy drinks as it stimulates brain function and elevates energy levels. When it’s combined with other active ingredients, the energy boost becomes more effective and long-term.

Since caffeine intake results in increased heart rate, too much of it can cause various health problems.

If you’re a healthy individual, the caffeine content in Red Bull won’t be a problem for you.

Overall, Red Bull is a staple when it comes to the effective energy boost, but its high sugar content is a major drawback.

Even though the energy boost provided by Red Bull is also a result of its high sugar content but the health issues it can cause in the long run cannot be ignored.

Sugar is one of the major causes of weight gain and liver diseases. Excess sugar intake can also increase the risk of heart attack and kidney diseases.

The American Heart Association (AHA) recommends a daily sugar limit of 24g for women and 36g for men.

To avoid going overboard with your daily sugar consumption, switching to the sugar-free version of Red Bull is a better option.

Taurine is an amino acid that’s essential for various body functions. It’s naturally found in the body and can be consumed through food like meat, fish, and dairy.

Taurine is commonly found in energy drinks because it enhances mental and physical energy. It enhances exercise performance and delays fatigue.

Based only on the caffeine content, the energy boost of Red Bull is not that strong, but when it’s combined with taurine, the effects multiply.

Check this video out to know more about taurine:

This table shows the list of B-vitamins included in Red Bull energy drinks along with their functions.

Energy drinks often result in a crash, which can be somewhat similar to the after-effects of consuming alcoholic drinks. But with alcoholic drinks, the crash is due to intoxication, while with energy drinks, it occurs due to the high sugar or caffeine content.

The effects of alcohol on the body are opposite to that of energy drinks.

Energy drinks clear mental fog and improves alertness. Whereas, alcoholic beverages slow down your brain function and prevent you from thinking clearly.

No, Red Bull when consumed in moderation, isn’t harmful.

Red Bull contains ingredients that are safe to consume. However, if consumed in excess, they can result in various side effects.

With 27g of sugar per can, consuming more than one can in a day is unhealthy for your body.

To eliminate the risk of excess sugar consumption, you can always go for the sugar-free version of the drink.

Red Bull sugar-free contains the same ingredients except for sugar. Instead of sugar, the drink contains artificial sweeteners to provide the same taste and flavors.

Is Red Bull a Beer?

Beer is a product of malt and yeast fermentation. It’s a carbonated beverage typically containing less than 5% of alcoholic content.

Red Bull is nothing similar to a beer. It is based on ingredients that elevate energy levels while keeping your senses intact.

Overconsumption of beer can result in far more severe side effects than that energy drinks.

No, Red Bull and beer don’t taste the same.

Red Bull is sweetened with a high amount of sugar and artificial flavors. This gives it a sweet fruity taste with a bit of sharpness. The exact taste of Red Bull is hard to describe. It might require some getting used to.

Red Bull is also available in various flavors most of which are mostly based on fruits.

Beer, on the other hand, is typically bitter but depending on the type and flavor of the beer it can be a bit sweet or sour.

Can You Mix Red Bull With Beer?

Yes, you can mix Red Bull with beer, but this isn’t recommended.

Beer and Red Bull work opposite each other. While beer will help you relax, the sugar and caffeine content in Red Bull will increase your energy levels.

When combined, the caffeine keeps you awake and active underplaying the effects of alcohol on your body. Since you won’t experience the feeling of being drunk you’re likely to consume more alcohol than you normally would.

Not only does this affect your health, but it can also affect the safety of other people. The illusion of being awake while actually being drunk can result in accidents and mishaps.

Can Red Bull Help When Drunk?

Red Bull can reduce the effects of a hangover, but it can’t cure it completely.

Since energy drinks increase alertness and enhance energy levels, they can make you feel less sluggish and tired when experiencing a hangover.

However, consuming high amounts of caffeine when hungover can make you feel even worse. Therefore, stick to energy drinks that contain low caffeine content. With only 80mg of caffeine, the Red Bull energy drink is a good match.

Is It Safe to Mix Energy Drinks With Alcohol?

No, it isn’t safe to mix energy drinks with alcohol.

Mixing energy drinks with alcoholic beverages is a nightmare for your body. While alcohol acts as a depressant, slowing down brain function, caffeine acts as a stimulant that makes you feel active and alert.

Combining both of them will send mixed signals to your brain. This results in overdrinking since the actual effects of alcohol on your body are masked by caffeine intake.

Consuming both drinks together makes you appear less drunk than you actually are. This can result in severe mental and physical damage.

Apart from the classic Red Bull Original, it is available in the following flavors:

Red Bull contains a basic blend of ingredients that create a wholesome effect on your body. It doesn’t contain alcohol but is often mixed with various alcoholic beverages.

Mixing Red Bull with alcohol can result in serious health issues and can even affect the safety of others.

Red Bull also comes in a sugar-free version, which in my opinion is a better option, since excess sugar consumption can lead to various health issues.